“…you can feel the live energy touch your soul…The performers’ passion seeps through every note.”
- Performer Magazine (August 2014) 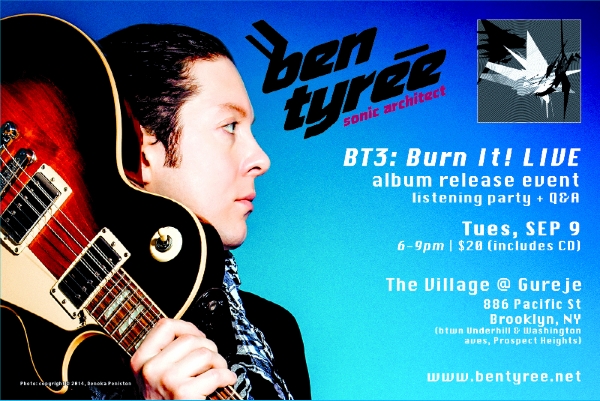 Whether it refers to a raging inferno or a long, slow smolder, Burn It! not only serves as the title for guitar wizard Ben Tyree’s first live album but as a mantra for his blistering BT3 trio. Recorded in 2010 at the Brooklyn Academy of Music’s prestigious BAMcafé Live series, the scintillating date finds Tyree, his bandmates and a few special guests igniting an enthusiastic crowd of hundreds with their unique blend of jazz, funk, and rock.

The material on Burn It! LIVE is drawn from BT3’s debut CD, re:Vision (Sonic Architectures, 2010), and stunningly showcases the ways in which the live setting can utterly transform a set of songs. “You can’t beat that live energy,” Tyree says. “I love studio recordings, but the difference is like film versus theater. You just can’t capture that live magic in the studio.”

On this particular evening BT3, which boasts a revolving line-up, consisted of Tyree, bassist Kevin Farrell, and drummer Lawrence Qualls. Reprising their guest appearances from re:Vision, tenor saxophonists Stacy Dillard and V. Jeffrey Smith also step in for one song apiece. But you can expand the line-up by a few hundred to include the responsive and very vocal audience who gathered at BAM that day for the trio’s free performance in the world-famous venue’s stunning atrium space.

“For a lot of the audience, this was their first time hearing me,” Tyree recalls. “And it was an amazing reception. It’s always nice when you’re converting people to your art.”

Based on the evidence on Burn It! LIVE, BT3 won over a number of converts that night. And it’s no surprise given the contagious momentum of the album, which kicks off with the insinuating, adventurous “The Roots Run Deep,” which introduces the trio’s dazzling virtuosity and telepathic interaction; continues through the skewed funk of “Dizzle McSizzle,” which shines the spotlight on rising star Stacy Dillard; and climaxes with the full-throttle funk-rock of “Drop Back,” sure to leave most of the audiences mopping the sweat from their brows.

In between, the multi-faceted trio explores a wide range of inspirations, from the Latin-inspired grooves of “Telekinesis” through the trance-like vibe of “Shapeshifter” (the studio version of which featured John Medeski on organ) and the deep-pocket, Nile Rodgers-inspired funk of “Because We Can” with V. Jeffrey Smith’s sinuous tenor, to the contemplative, meditative ballad “The Search,” a prayer in the questing John Coltrane mode.

A product of the diverse Washington, DC music scene, Tyree is a performer and composer of virtuosic ability, infectious groove, and eclectic tastes. Whether navigating the off-kilter grooves of BT3 or rising to the formidable technical and personal challenges of his classically-influenced acoustic solo recording Thoughtform Variations (Sonic Architectures, 2012), he consistently proves himself to be an artist with a distinct and memorable voice.

Tyree studied at DC’s prestigious Duke Ellington School of the Arts and at Howard University, co-founding the pioneering jazz/hip-hop/rock fusion band Miscellaneous Flux before relocating to Brooklyn in 2002. Since then he’s worked with artists as varied as Vernon Reid, Valerie June, Kyp Malone (TV On The Radio), The Family Stand, and Elliott Sharp’s SyndaKit, among others. He performs regularly with Stephanie Rooker & the Search Engine, Michael Veal’s Aqua Ife, and Burnt Sugar: The Arkestra Chamber.

His compositions have also taken the leap from stage to screen. He has scored several independent films as well as pieces for television that have appeared on ESPN and in advertising campaigns for companies like Green Team USA.

With Burn It! LIVE, he reveals another side of his personality, showing off the infectious grooves and staggering chops that make his live shows such an unforgettable experience.

Hope to see you there!
BT